Meet Emily from South Dakota and some of the animals she’s rescued over the years!

What is the ‘rescue spotlight’? The rescue spotlight is a core component in the Gemma Rose Project’s mission. It’s purpose is purely to raise awareness of animal rescue, the people involved, while giving a genuine insight into what happens behind the scene. We want to make the general public aware of the good, the bad and the ugly truths about what goes on. The rescue spotlight also gives us an opportunity to award those who are dedicating their lives and giving up their valuable resources to help animals in need.

January 2017 – Rescue Spotlight:
Our second edition and January 2017 rescue spotlight award goes to Emily from South Dakota. Emily is involved with and works with several rescues in the area; Sioux Falls Area Humane Society, Rescues Unlimited and Tracy Area Animal Rescue. We came in contact with Emily via our social media platforms and watched her efforts unfold over the last few months. We reached out to her earlier in the month to capture her story and share it with the rest of the world. Emily has only been fostering for about a year now and has already helped 46 dogs. We couldn’t believe that in only a year, Emily opened up her home and her life to help the lives of 46 animals. As a sincere token of our appreciation, we’ve awarded Emily a $25 Amazon gift card to help her continue her mission. Read on to hear Emily’s perspective of rescue, learn some interesting details about South Dakota, this one is a great read! 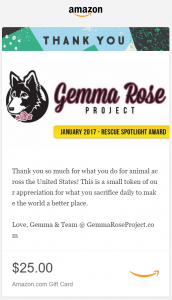 Here is our conversation in Q&A form:

Gemma Rose Project: Tell us a little about yourself and how/when you got into animal rescue?

Emily: I got started in animal rescue by volunteering at our local Sioux Falls Humane Society a couple of years ago. I grew up on a farm in rural Minnesota and have always loved animals. Our local Petco dog trainer told us about how he fostered through one of our local rescues, SEPR, and I became interested in it. We began fostering just a little under a year ago, and my first litter of foster puppies was born on February 9th, 2016. I saw a post from Rescues Unlimited asking for help with fostering one of the 5 whelping moms they had at the time, and decided to give it a go. Lakin was our first foster dog – a Rez dog who was rescued after she and her sister were found out in the cold. I have fostered most of my dogs through Rescues Unlimited, but also foster through Tracy Area Animal Rescue. Because we specifically take pregnant moms and young puppies, it is easier to be associated with more than one rescue so that I am able to help whenever a litter comes along.

Gemma Rose Project: How many dogs have passed through your foster-care in those years? And how many times have you ‘foster failed’?

Emily: We have fostered a total of 46 dogs over the past year. 32 of those have been longer term fosters – 4 litters of puppies, a corgi, a boxer mix, a spaniel mix, and lab mix. 14 of them were either short term fosters or my roommate Brenda’s foster dogs. We have yet to foster fail as we currently have two of our own dogs, Bear and Sage, under 2 years old and they keep us on our toes. I know that I will eventually expand my pack, but I hope to be in a bigger house before that happens.

Gemma Rose Project: How do you handle bringing in animals that don’t get along with each other? Have you ever come across such a scenario?

Emily: We tend to foster litters of puppies and their momma because they are generally better off separated from the other dogs anyway. Fortunately, all of our moms have gotten along with my dogs. Our dogs both love the puppies and therefore we haven’t had too many issues. We choose to foster puppies as Bear, my huskador, seems to have an easier time acclimating to them than he does to other dominant adult dogs. We do not introduce our dogs to the moms until they are at least 1 week post-partum. We have two separate fenced in yards that allow us to expose our dogs to the new ones through the fence before physically interacting. Allowing dogs to get used to the smell of another dog before introducing them to each other is generally a good practice to use when bringing a new foster pup in. We have had temporary fosters that Bear did not get along with (and vice versa) and simply chose to keep them apart as we were not keeping them long term.

Gemma Rose Project: How has fostering and being involved in animal rescue impacted you financially?

Emily: I have thankfully been VERY blessed with donations from friends, family, and individuals in the community. I paid for a lot of the supplies for our first litter out of pocket, and it definitely put a dent in my wallet. I have used an Amazon wishlist, Facebook posts, and a GoFundMe to help supply food, puppy pads, money to help with vet bills, and other supplies. We had a puppy named Birch, from our second litter of pups, who had a bout of coccidiosis followed by a terrible adverse hypersensitivity reaction to the drug used to treat it. The vet bill for Birch’s episode ended up totaling $508.33, which I had to pay up front and out of pocket as most of his treatment was given as the Emergency Animal Hospital in our town, which requires you to pay up front. I was extremely fortunate in that my friends and family donated all of the $508.33 back to help me pay this bill. Most importantly, little Birch recovered and is now in a loving home with his momma who drove two hours just to see him while he was at the vet for those couple of days! Most rescues will pay for everything you need for your fosters as long as it is pre-approved. We try very hard to fundraise and get all of our supplies donated so the extra money can be used on more expensive medical procedures and emergencies that arise in the midst of taking in a dog.

Gemma Rose Project: What has been the most difficult part of fostering and animal rescue?

Emily: The most difficult part of animal rescue has definitely been dealing with sick puppies. Puppies can go downhill very quickly when exposed to certain pathogens and viruses, and so being vigilant and proactive is essential. Because most of our moms come in as strays, almost all of the pups we take in have bad cases of worms, coccidiosis, giardia, or respiratory infections. Thankfully, we have never had to deal with distemper or parvo. It is nerve-wracking to be taking care of a puppy with any symptoms of diarrhea, vomiting, or lethargy as it could be something as simple as stress and diet change or something as dangerous and lethal as parvo. The responsibility of having a puppy while it is sick can be quite stressful. Thankfully, I have a lot of experienced fosters and rescue personnel to chat with about symptoms and we have a 24/7 emergency animal hospital that we can utilize if need be.

Gemma Rose Project: On the contrary, what has been the most rewarding?

Emily: The most rewarding aspect of fostering is adopting our puppies into their forever homes. It’s seeing an unwanted mother give birth to beautiful babies who are mutts, but nonetheless loved by their chosen family. I enjoy meeting people who have always purchased from a breeder and giving them insight into what rescue is and why it is so important. Contrary to a lot of larger states, South Dakota deals less with death row dogs and more with reservation dogs; dogs that can live their whole lives as feral animals, without proper care, nutrition, or human interaction. Until people are exposed to rescue, and why it is so important, they may never understand what a difference they can make by adopting and not shopping. It changes the life of that dog, forever.

Gemma Rose Project: What is your most memorable moment in animal rescue?; is there one that stands out the most?

Emily: I think that the most memorable night that I had in animal rescue was the day that Birch had his adverse reaction to Albon, a sulfa drug used to treat coccidiosis. He had a reaction similar to vestibular disease, and our primary vet had suggested observation and hospitalization as necessary. I was unable to reach my main rescue coordinator, and was able to contact two different directors at two different rescues for advice. When neither of these directors had any ideas as to what was going on, they messaged rescue contacts that they had from the cities, and were able to relay the information back to me so we could decide what to do in the best interest of the pup. We were able to weigh the pros and cons of hospitalizing Birch, and were able to brainstorm different reasons he could be acting the way he was (before it was diagnosed as an adverse reaction to the Albon, something that is not normally associated with the drug). It was heartwarming to see different rescue personnel come together to brainstorm and support me as I decided what to do for our precious Birch.

Gemma Rose Project: What is a something about animal rescue that you would want the general public to be aware of?

Emily: I would love for the public to know that there are so many ways you can be involved in helping rescues – fostering, donating, volunteering, transporting, networking, sharing posts, etc. There is NOTHING too small that you can do. Even if it’s just promoting adoption instead of purchasing from a breeder. Even if it’s educating yourself on puppy mills, death row dogs, shelters, the costs of rescuing an animal, and other topics that are so prevalent in our world. Passion is so important in this world, and no matter what you’re passionate about, you should always be doing more to make a positive influence in this world.

Thank you for taking the time to read Emily’s story. We hope you’ve gained some insight into the animal rescue world and maybe now are even contributing in some way.

Thank you again for reading and supporting our mission! Hope everyone is having a great new year!